Once upon a time in Gängeviertel

The room and light installation „Once upon a time in Gängeviertel“ was a possibility for me to combine quite a few elements that matter to me in my artwork.  I am quite happy, that I was able to take as much time as needed for this project.  A process with a lot of “trial and error“ moments. The installation was an exhibit in one of the Kutscherhaus-apartments in the Gaengeviertel, consisting of  68 light-boxes in old, wooden picture frames each containing a photograph, hanging on the walls where a lot of the old wallpaper still existed The photos told the story of one of the former residents in her flat. By lighting up the pictures chronologically the visitor was guided through the exhibit. At the same time  accents of sounds and musical atmosphere gave more support and landmarks  to follow the history. The idea came to me while I was renovating the old rooms in Gängeviertel- better said, removing old wallpaper. Layer for layer- I got an impression of the decades and the people who used to fill these rooms and this neighbourhood with life. What did daily life look like here, what kind of people lived in these small courtyards- in the worker- and harbour quarter- the Gängeviertel of Hamburg? I started my research in libraries and museums and found out a lot were hustlers, honest workers, prostitutes and alcoholics.One story really impressed me. It was said that when festivals and holidays were approaching the residents of the Gängeviertel would bring their furniture to the pawnbroker to get money for beautiful clothing, drinks, and entrance tickets. When these party times were over the people would buy their mattresses back as the first most important item. The story touched me, was it not similar to the new- now-a-day occupants* of Gängeviertel?- so I decided to work with it.

*The new occupants of the Gängeviertel is the initiative „Komm in die Gänge“ http://das-gaengeviertel.info/. My entanglement with this group and the place began in 2009. That summer I was asked whether I would like to be a part of an exhibition which would simultaneously be  a „house squatting“ which would happen not in the form of burning barricades and boarded up windows, but as an exhibition that was to be open and accessible to all people of the city. Consisting of about twelve apartment buildings in the Hamburg city center, the last relics of the Hamburger Gängeviertel which stood partly empty for the last eight years and at that time had been sold in a highest bidder process to a Dutch investor. The investor planned to teardown 80% of the buildings to make a lot of cash with condominiums. With the occupation we wanted to draw the attention to  mismanagement,  the gentrification, the rising rents and the cutbacks in cultural politics as well as stand for the preservation of the old buildings and to call out loud for our right to be part in the creation of our living space in the city of Hamburg.
Because I work spatially, a flat was suggested to me in the „Kupferdiebehaus“ as exhibition space. In this building there were temporary studios and nobody would be surprised if material was dragged in and out. Anyhow, squatting buildings is illegal and immediately on the other side of the street was a police station. Access for the remaining buildings was only possible on the day of the squatting itself and the artists had two-hours time to hang their pictures or to spray or paste street art to the walls. Thus, I spent the whole of August 2009 on the third floor, of the building number 43 on Valentinskamp. Different than most of the other 11 buildings this was not a working-class flat with low ceilings, rather an old building richly decorated with stucco. Together with Jakob Munkwitz, Arne Knöll, Kalyani Hemphill and Daniel van Eendenburg, we recreated the 90 square meter flat. Inspired by the ravages of time and nature, which takes back its own when humans are gone. In this post-industrial mania a couple of installations developed. On the day before the occupation, the 21st of August, in the middle of work, one of the organizers got a phone call from the police asking if there was a squatting planned…but nothing more. On Saturday the 22nd at 12 o’clock the doors opened, the press was informed and already weeks ahead, the red circle had been pasted throughout the city -The logo of the initiative „Komm In Die Gänge“-, with the information about the “When and Where”, as a big invitation to the citizens. During this week-end approximately 200 artists exhibited on every floor and in every room of the twelve buildings – there was a wild party with 2000 visitors and we were not removed, also not on the next Monday.
The police only showed up to ask us to turn the music down a little bit. Now six years later we are working together with the city in restoration and renovations, we negotiate about hereditary lease and self-administration and have founded an association and  registered a co-operative. This is only a very brief summary of the situation and omits many details, to be sure the situation is not quite as pretty and rosy as it sounds here.

I still get quite emotional when I remember our beginnings. 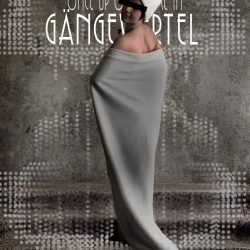 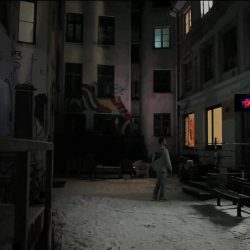 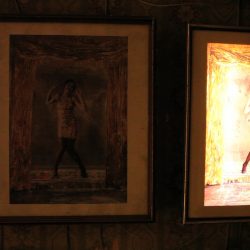 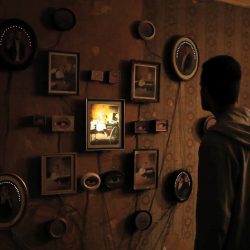 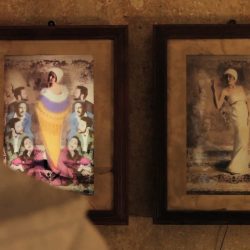 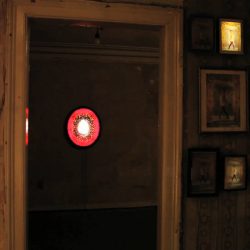